A massive update has just gone live to Robocraft! The team have been working on a new feature which will provide greater progression across all weapon types! That feature is called Weapon Ranking!

As you deal damage (or heal) in matches, your gun will earn XP. Let’s say you have a robot equipped with lasers and nano’s. If you spend all of your time dealing damage with lasers, the XP you earn in game will be given exclusively to that weapon. If you ONLY used nano’s, then you would only receive experience for your nano weapon.

However, if you deal damage and heal at the same time, the amount of XP that you’ll earn will be split between the two respective on much damage or healing you caused with each weapon. So if you spent a lot of time dealing damage and only a little time healing, then you’ll gain a significant amount of XP for the damage dealing weapon compared to the healing based weapon.

Once you have filled the XP bar for a weapon, you’ll be able to spend Robits to level up that weapon! There are ten levels to progress through for over 30 weapons which means there are 300 opportunities to level up your arsenal! The weapons level will be shown in your inventory.

But you will upgrade your weapons from the weapons tab on the home screen.

But what happens once you level up a weapon? They will increase in firepower! It will take a significant amount of time to level up a weapon completely and there are over 30 weapons to upgrade!

Players will also be able to compete against any other player via the new leaderboard system. You can also filter this information by friends list or region! we’re going to be tracking core data to celebrate the top players and clans in Robocraft. The leaderboards will track two core factors in game. Player Rank and Weapon Rank.

Weapons will now have their own individual matchmaking rating. This means that the more you use a weapon and win battles, the higher your weapon rank will increase. There will be 5 main ranks to progress through starting from Bronze and moving through Silver, Gold, Diamond and ultimately Protonium.

How Does Winning And Losing Affect My Weapon Rank?

The amount of weapon ranking points that you will earn or lose is dependant on that weapon’s current weapon rank. To start it will be easy to climb through the ranks, but over time it will be tougher to increase your weapon rank. Below are the points you’ll earn for winning and losing for each rank. 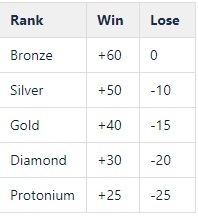 To show the epic scale of this weapon progression ranking, in order to reach maximum rank for ALL weapons in game you would need to play over 4,000 games and never lose a single match.

With this new Weapon ranking system we are hoping to see players refine their skills and talents to become the best with their favorite weapon! But we’re also hoping the allure of ranking up other types of weapons will provide players with a greater reason to try other weapon types.

The update is now live! Go ahead and play it via our official launcher or via Steam! We can;t wait to see what you guys think of the new additions and changes.

Below is a full patch note list for this update

We received a ton of feedback from players for weapon balancing and have implemented balance changes for many of the weapons. below are a list of changes for each weapon part

We have also actioned some movement balance improvements which have been gathered by the community after our F=MA update.

In addition to the changes above, the following Mass per CPUs will apply to these parts

We hope that you enjoy the new update! Build, Drive, Fight!