Hello Robocrafters! The big physics agility update is now live! Josh and Chris live streamed a developer build last night, showing off the changes to the agility system, the CPU progression system and revealed the NEW flying AI robots. We uploaded that video to our YouTube channel where you can watch it on demand!

This massive update includes big changes to the way robots feel. Gifs, screenshots and text don’t do it justice, you HAVE to play it in order to really experience the types of changes that F=ma has on all existing and new robots! So what are you waiting for?! Play it now, install the game if you haven’t done so already and then let us know how the new robots FEEL when controlling them.

For those of you who aren’t able to access a PC to play Robocraft RIGHT NOW, read on for further details on the changes in this major update.

Heavy robots feel heavier, lighter robots are much more nimble. Robots will also rotate at different speeds to factor in these new changes, meaning if you have created a completely fearsome robot with Weapons attached to one side, you should be even more cautious of being flanked if you haven’t factored in your rotation speed! We expect players will create new strategies, playstyles and even builds to consider for this major change to movement.

Sprinter Legs have also had a particularly nice adjustment made to them which removes the delay in movement after landing from a jump. They are now more agile than ever before, and will be able to jump in and out of battle quickly.

Other movement parts are already being worked on and will release very soon! Let us know what you think of these new changes after spending some time with them.

Another system that we introduced last week was CPU progression. This system gives new players a greater sense of progression and adds greater value to Robits.. We understand that building massive robots from scratch can be pretty intimidating, so new players will start with a garage bay of 750CPU. From there they will spend Robits to upgrade their bay at a reasonable pace, while learning more about the building systems. There’s a lot of complexity during the later tiers of Robocraft and it can be quite challenging for new players. Of course, as we see new players interacting with these changes, we will adjust to improve everyone’s play experience.

Players who have already created various garage bays will not have to worry about these changes for any robots that were attached to a bay BEFORE this update went live. Your robots garage bays are automatically upgraded to store your robot without spending additional CPU. however when purchasing any new garage bays, you will need to upgrade them via Robits.

There will be other forms of usage for Robits which will affect ALL players. We understand many veterans have amassed a massive number of Robits and have also MAXED out all their garage bays, so the CPU progression system won’t affect you. BUT the next feature we will implement will give everyone a reason to use Robits

In order to provide players with robots that meet the 750CPU limit, we have had to create a few new starter robots for players. Check them out below!

The Body builder templates have been adjusted so that they are well below 750CPU AND still allow you to place movement parts and weapons onto the robot.

AI have taken to the skies!

The AI robots have obtained their pilots license and are now able to use robots installed with wings and rudders! As seen in last night dev stream, they are tenacious!

We have rebranded Cosmetic credits into Cosmic credits, you’ll still be able to purchase Cosmetic items with these credits and they’ll continue to function as originally intended. However they will have the added functionality to exchange them for Robits as we make Robits more valuable.

Around 1,000 players were involved in our last big weapon balance feedback form! We’d like to thank everyone who took the time to answer a few questions and even submit a couple of suggestions on how you feel we should improve Robocraft. We are currently talking internally about some of the most requested features and will update you once we have more concrete plans.

This update included a variety of weapon changes based on community feedback and we wanted to share the results so that you know why we are making certain changes. Of course, balancing is an ongoing development as we continue to improve Robocraft. So a few days from now we’ll be opening up the weapon balance feedback thread once more.

Below are the results from the feedback form and on the furthest right hand side is a column of changes we’re making. 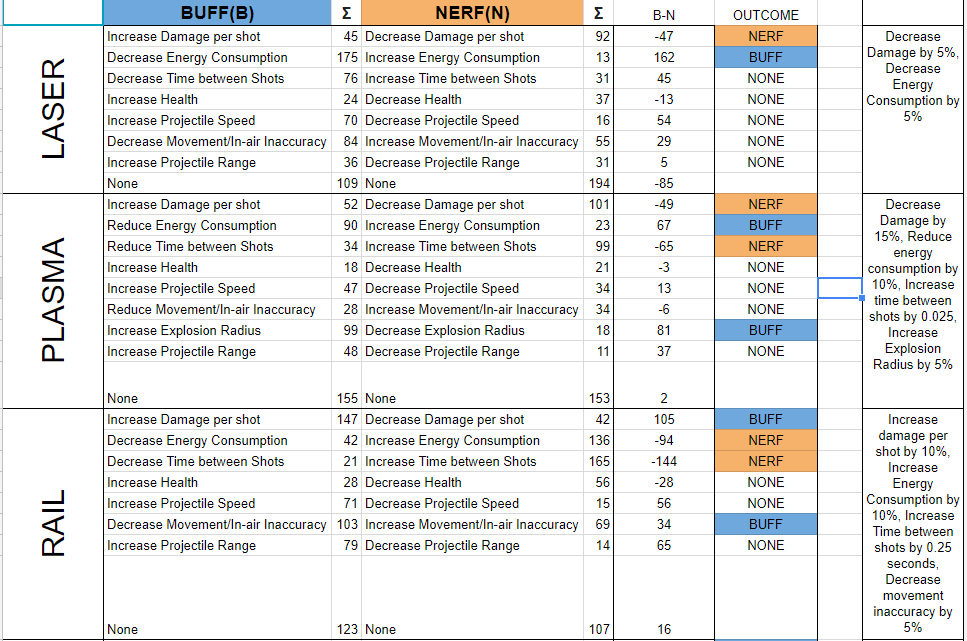 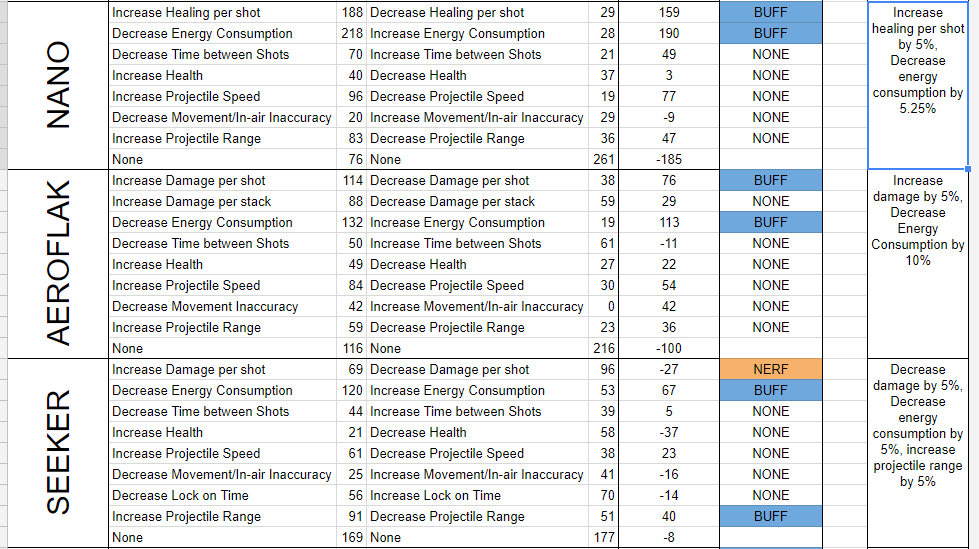 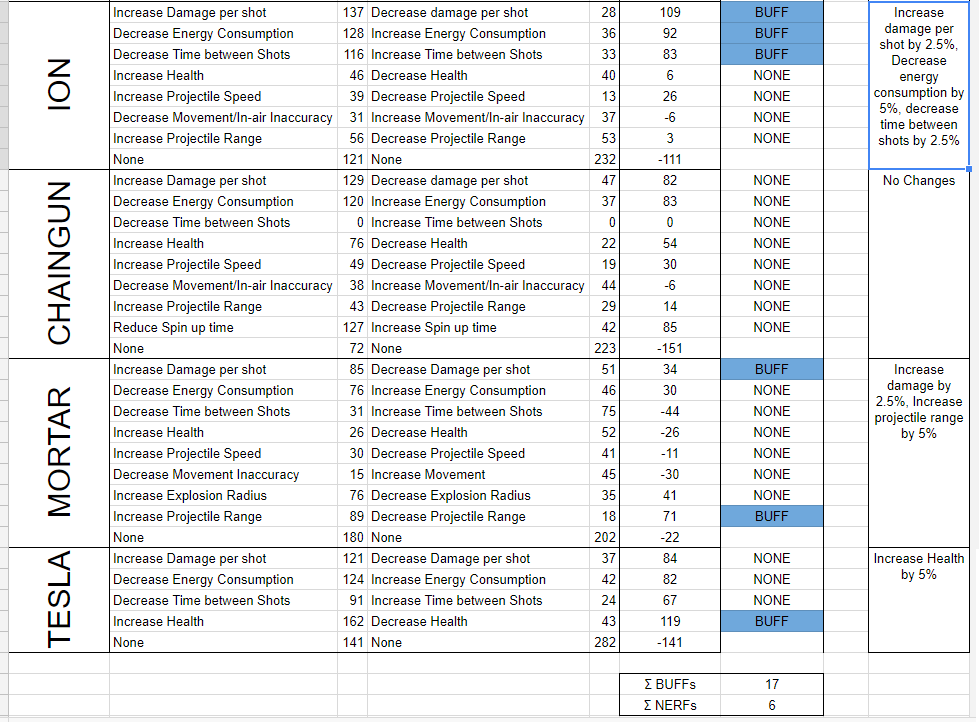 In addition, below is a list of changes in text form in case it is difficult to read the images above:

We hope that you enjoy these changes, we’ll wait a few days until we open up the official feedback thread again. Additionally, if you do use the feedback thread, know that the additional suggestions (which aren’t related to weapon balance) are also being looked into! We are doing our very best to create a game for our players, and seeing this data and the most requested features in this form when there are hundreds of thousands of players every month is really useful. If you and your friends who play Robocraft didn’t send any feedback for the last form, Make sure you do it next time and we’ll have even more data to work with!

Our first season of RoboPass ends this Monday on February 18th! Players were able to progress through 30 grades to unlock cosmetic items and cosmetic credits. Some of these items included a firework seeker, new spawn and death animations and Neon cubes! Those who progressed through the free version of Robopass unlocked several items, but those who purchased RoboPass plus unlocked additional items at the cost of $9.99 (or $4.99 for owners of Lifetime premium)

If you have played the free version of RoboPass, you can purchase RoboPass plus to unlock all items up to your current grade! These items in total (including CC) would be worth around $100 if purchased individually.

Later today Josh and Chris will stream Robocraft once more, playing the latest MAJOR agility physics update against other players! The stream will be broadcasted directly on the Steam Page, on Twitch and on Youtube!

What are you doing reading this still!? Go play Robocraft right now and experience the MAJOR changes to agility that we have been working on! If you still need more reading material, patch notes will be posted below, but in order to really understand the new changes we have made, you NEED to play it!

Patch notes are below, but seriously, go play Robocraft right after reading them!

See you in game!