Welcome to February the 6th’s Dev Jam! This week we share details on movement physics overhauls, CPU progression system and remind you about this weeks Artbot Challenge

A major physics overhaul factoring in F=MA (and inertia!) will launch next week. Robots which are large and bulky will not be as nimble as a much smaller and lighter robot. While it is very difficult to describe how this feels in words, we know that you will feel the difference once these changes are live. We can’t wait to see what you think of this major update as robots should feel much more satisfying to control.

The first selection of movement parts that will benefit from the agility and physics overhaul will be:

Other movement types will be be adjusted to factor in the F=MA system over the next few updates. Each movement part is being adjusted individually to improve the overall feel of movement in Robocraft and make building matter more!

To provide a refined building experience and to help new players settle into Robocraft we have reduced the initial CPU limit for garage bays. We have chosen to do this for the following reasons:

In addition we are going to be changing the robot ranking scores and limits so lower tiers effectively have lower CPU limits.

This ensures a robot at the CPU limit for a new bay will still be effective in Tier 1 and gradually raises the size and complexity of robots that players can build as they progress.

Each garage bay will have its own CPU limit and will start at 750CPU. However, each bay can be upgraded individually up to a maximum of 2,000 CPU. In order to increase the CPU it will cost a number of Robits. Each upgrade will increase the CPU limit of each bay by a small amount

Once a bay reaches the normal CPU limit of 2,000, you can upgrade it once more to turn it into a “Max CPU” bay. Once you have done this, the bay can not be upgraded any further and you’ll be able to build robots in it to a CPU limit of 10,000. Please note, that even if you upgrade a bay to “Max CPU” it doesn’t mean that everything you build in that bay needs to be a Megabot.

Downloading Robots from the Factory under the new CPU progression system We will be updating the factory to provide more information on the amount of CPU you will be expected to have in a bay before you download a robot from the factory. If you have a bay that only has 1,000 CPU, you’ll be unable to download a 1,500 CPU robot until you upgrade your bay to fit the 1,500 CPU requirement of the bot that you’d like to download.

We have adjusted the starter bots and the modularized body builder so that they fall below the 750CPU limit for new players.

We will be converting all current T1 - T5 active bays into a 2000 CPU bay. However if you have a Megabot in a garage bay, that bay will be converted into a Max CPU bay.

The CPU progression is just one upgradeable feature that players will be able to spend their Robits on. Over the coming weeks we’ll be sharing more details on new types of uses for Robits.

During the next update we will be renaming cosmetic credits for all accounts into Cosmic Credits. While players will still be able to purchase cosmetic items with this form of currency, we’re also going to be allowing players to purchase Robits with Cosmetic Credits. 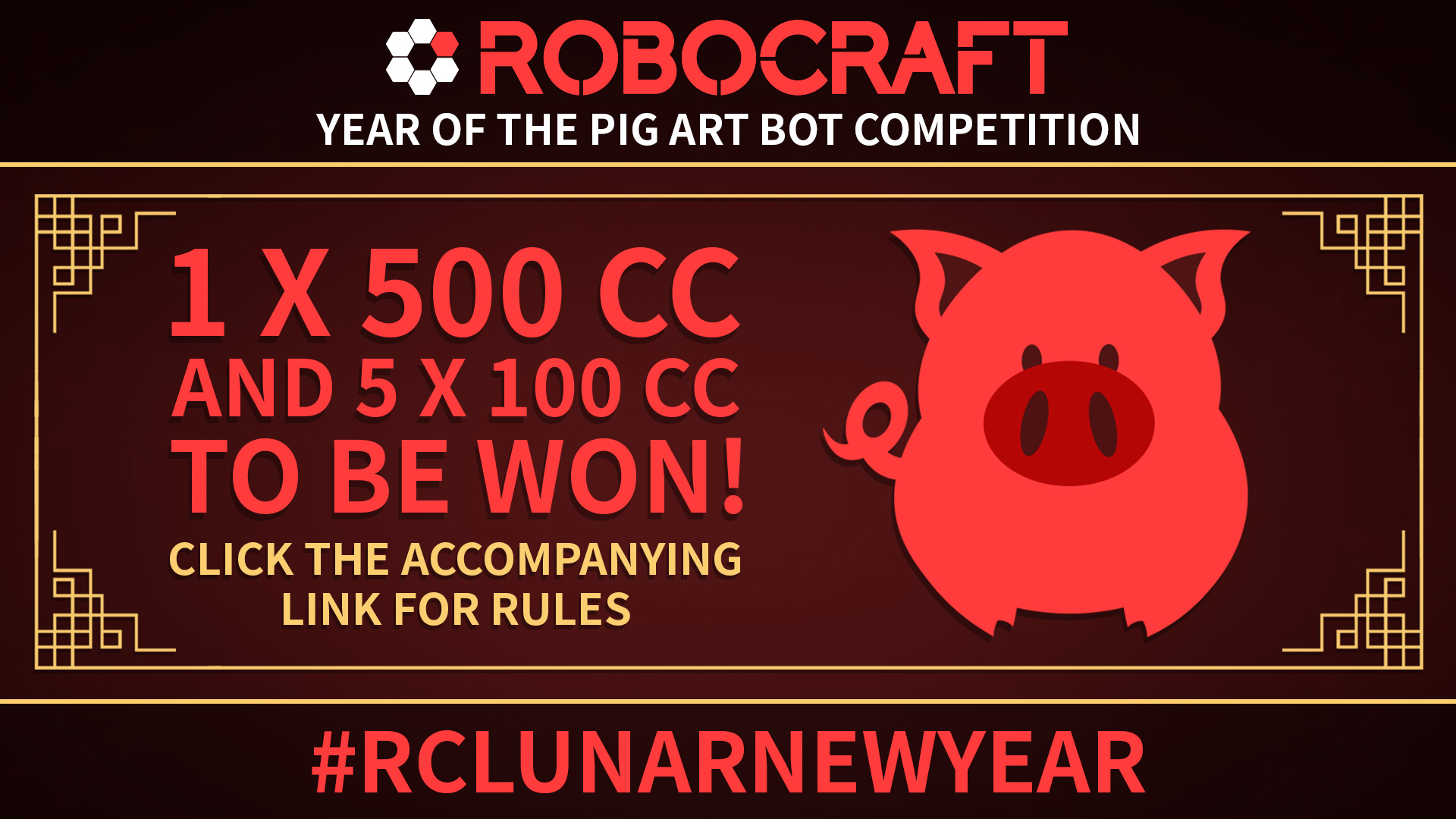 To celebrate the Lunar New Year, Robocraft Premium For Life is on sale at 30% off!

We are also running an Artbot competition To celebrate the dawning of the year of the pig which will end on the 12th of February. Five robocrafters will receive 100 CC each and one lucky Robocrafter will win 500CC!

For more details on how to enter, please visit the competition announcement On Steam

The competition closes on february 12th, winners will be chosen at random on the 14th of February