Last week we revealed the Event system, designed to make building matter more by providing players with information on the map and game mode BEFORE entering a battle.

Today we wanted to reveal two additional parameters which will be at play for each of the three planets currently available in Robocraft. 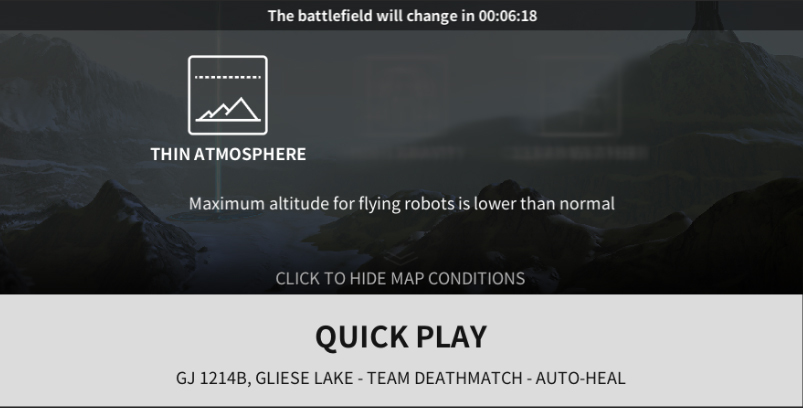 We will be adjusting the density of the atmosphere for each of the planets, This will adjust the flight ceiling. Both Earth and GL1214b will see their air density remain much the same but Mars will be affected by these changes

Mars’ lower than normal air density will mean that aircraft will fly at a lower height than on any other planet. This will mean that those using aircraft as their primary robot will need to be cautious as they won’t be able to fly quite so high on Mars, making them a bigger target for all players.

In addition to air density changes we will also be making adjustments to each planets gravity.

Each planet will have its own gravity which will impact a few core factors when designing your robot.

Planet Earth is unaffected by these changes so any robots built up to this point will operate as expected on Planet Earth. Below is a comparison gif to show the impact gravity has across each of the three planets when using a heavy mech walker

On Mars, Gravity will be reduced and this means that you’ll even be able to attach more to your robot before their carry mass is maxed out.

But be careful, while playing on GL1214b, Gravity will be increased and will mean that it is in your best interest to design an efficient robot which is not impacted by the increased gravity of the planet.

One more condition to reveal

The Air density and Gravity are locked to a planets atmosphere. But there will be one more condition which will change the battlefield. We’ll reveal more news on that soon!