Here at Freejam we specialize in creating positive gaming experiences through user-generated content (UGC). We’ve been doing that with Robocraft since 2013 and in just over a week’s time we’ll be releasing our next UGC game on Steam built entirely around cardboard - CardLife. 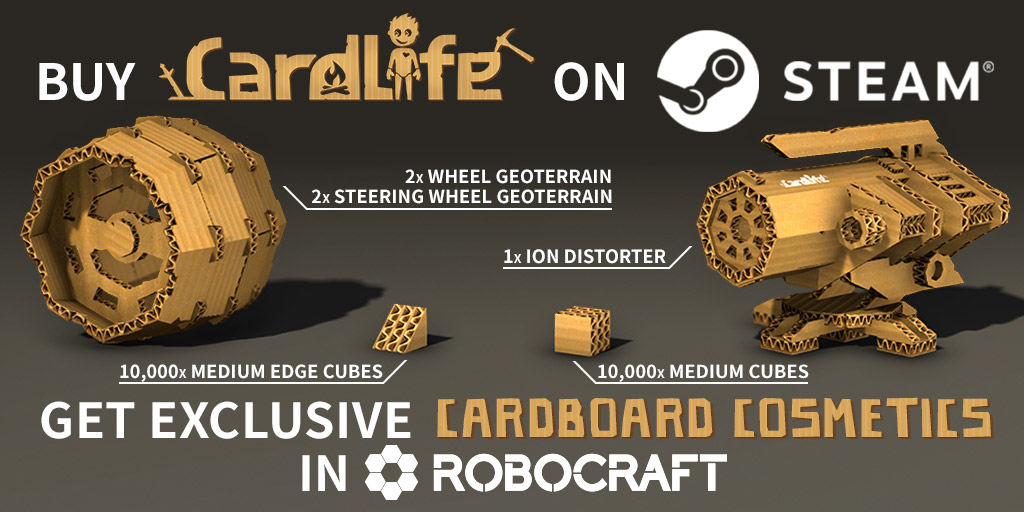 To celebrate this milestone event and to thank those of you that choose to support us through the purchase of our games, we’ve collaborated with the CardLife team to bring some of their cardboard aesthetics to Robocraft.

Created by a dedicated and incredibly talented team here at Freejam Games, CardLife is an online science fantasy survival game made entirely of cardboard. Play by yourself or with others as you explore a fully editable cardboard world. Mine for resources, fight fantastical creatures and bring your imagination to life as you draw everything you craft. It’s coming to Steam Early Access on October 9th. If you haven’t already done so, you can add it to your wishlist over on Steam.

Check out the trailer for the game below.

How to claim your free cosmetics:

These new cosmetic parts are super-exclusive and can only be obtained by purchasing CardLife on Steam. When you purchase CardLife, the cosmetic parts will automatically appear in your Robocraft account when you next login through Steam. If you have multiple Robocraft accounts, please ensure that you login to your main Steam-linked account as the parts will be bound to the first account that it logs and parts are non-transferable.

As these parts are cosmetic variants of existing Robocraft parts, you must have those parts unlocked first, or you won’t be able to use them on your robots; they’ll remain locked until you unlock the vanilla part on the Tech Tree.

Here’s what you’ll get:

Finally, it’s worth noting that if you’re a CardLife founder, you’ll be able to transfer your ownership of the game across to Steam as soon as it launches. The CardLife team will go through the process on how to do this via email, so be sure to keep an eye on your inboxes.

CardLife is launched on Steam Early Access on October 9th